The 65th most popular snowboarding destination in Switzerland.

Located in the eastern Swiss canton of Graubuenden (aka Grisons), the Davos Klosters ski region consists of six ski areas in the Rhaetian Alps spread along the Landwasser valley. Lining both sides of the Landwasser valley the six ski areas include: Parsenn Gotschna, Jakobshorn, Madrisa, Rinerhorn, Schatzalp-Strela and Pischa. Overall, there are 110 pistes totaling 318km that are served by 55 lifts (27 drag lifts) with a maximum vertical descent of 2,030m. The Parsenn Gotschna ski area is the largest and most accessible from both Davos and Klosters, Jacobshorn is popular for its freestyle options, and Rinerhorn is known for its off-piste freeriding. The Davos Klosters ski region is infamous for all of the off-piste freeriding opportunties. Many hardcore snowboarders feel that the Davos Klosters region would be ideal to spend an entire snow season.

Located just south of Davos Platz, the Jakobshorn ski area is one of the two main ski areas in the Davos region and is the second largest after Parsenn Gotschna. While many snowboarders know Jakobshorn for its parks, it does have some spectacular marked but not controlled freeride options but the best require a bus back to the base. First, from the Jakobshorn top station, the ski route #14 heads east down to the village of Teufli where there is a restaurant and bus stop with hourly service to Davos Dorf. Second, from the Jatzhorn top station, the ski route #13 heads west down to the village of Muhle where there is also a restaurant and bus stop with hourly service to Davos Platz. In addition, there are off-pisted gladed routes from the Ischalp mid-station down to the base area. Keep in mind that while the ski area has a maximum descent of 1050m, you'll rarely want to ride all the way down to the base since it takes two cable cars to get backup. So, the effective vertical of most runs will be around 600m.

But back to what Jakobshorn ski area is most well known for, it's freestyle options. It has an excellent two-line terrain park complete with tables, kickers and rails along with a 120m halfpipe. It's served by the Jutz lift. This snowpark is open in the evenings with floodlights from Tuesday through Saturdays, except Thursdays for some reason. If that's not enough, then there is also a 22 foot wall superpipe near the base area just above the Bolgen apres ski bar.

Noteworthy, the valley village restaurants in this region are particularly disappointing especially compared to neighboring Tirol and Sud-Tirol. Their menus tend to have limited variety and are very pricey. The exception tend to be the lone Italian pizza/pasta restaurant. Luckily, mountain huttes tend to be very good with traditional specialties at more reasonable prices. So plan on enjoying long late lunches up on the mountain.

After a long day of snowboarding at Jakobshorn, the apres ski action kicks off up on the mountain at the Jatzhutte, followed by the Bolgen Plaza near the superpipe. Down at the Jakobshorn base area, definitely stop by Bolgenschanze. If you do stay in Davos and are looking for some apres ski action, then check out the Piano Bar, the Cabanna Club or the Ex-bar. Apres ski is a very tame affair and can be kind of hit-or-miss. Of course, it's best on the weekend evenings, but that's still not saying much.

And, now for the pro-tip. In light of the fact that there isn't really an apres ski scene and little to see/do in the towns, Davos-Klosters is definitely the place to strongly consider staying up on the mountain at a gasthaus or hutte (not at a lift top station, but mid-mountain) where the food is amazing, there can be some apres ski and you'll get first tracks.

To reach the snowboarding in Davos from Zurich, the best bet is by train. It's a 2.5 hour ride with a single transfer in Landquart. This is the same train line that also services St Moritz, which is 30 minutes further along the line. If you are coming from the airport and don't want to use the trains, you can always use the Davos Express transfer bus service. The Davos Platz train station is right at the Jakobshorn cable car base.? 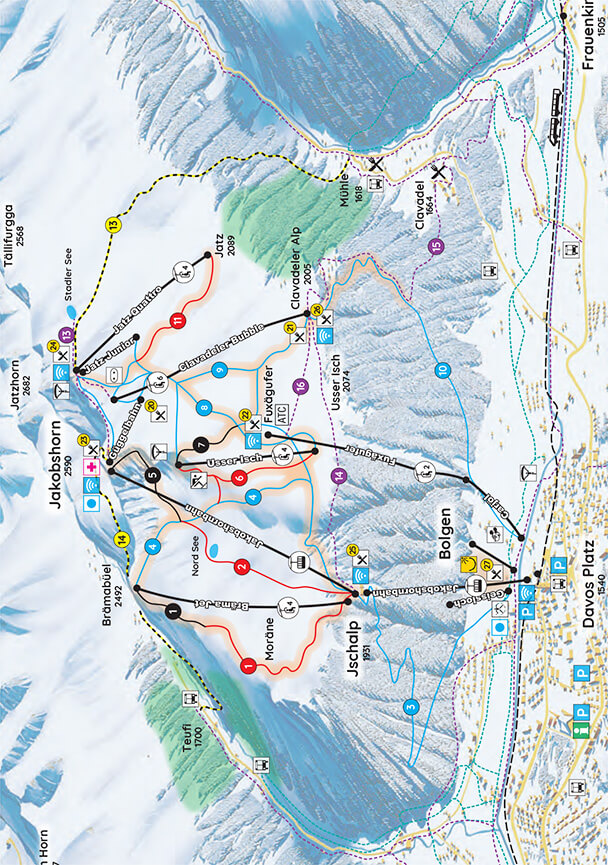