The 31st most popular snowboarding destination in Switzerland.

Southeast of Zurich in Klosters Dorf, the Madrisa ski area has 10 pistes served by 4 lifts accessing a maximum vertical descent of 1480m. Even though the maximum descent is almost 1500m back down from the Ratschenjoch summit to Klosters Dorf, the finishing piste #10 along the Schlappintobel is quite long so you'd probably only do it at the end of the day - typical laps would only have a maximum descent of around 500m. Most hardcore snowboarders are coming to Madrisa on pow days to shred the two ungroomed ski routes leading down from the t-bar summit including the Route Rätschenjoch and Route Chüecalanda.

The Madrisa ski area is part of the Davos-Klosters ski region. Located in the eastern Swiss canton of Graubünden (aka Grisons), the Davos Klosters ski region consists of six ski areas in the Rhaetian Alps spread along the Landwasser valley. Lining both sides of the Landwasser valley the six ski areas include: Parsenn Gotschna, Jakobshorn, Madrisa, Rinerhorn, Schatzalp-Strela and Pischa. Overall, there are 110 pistes totaling 318km that are served by 55 lifts (27 drag lifts) with a maximum vertical descent of 2,030m. The Parsenn Gotschna ski area is the largest and most accessible from both Davos and Klosters, Jacobshorn is popular for its freestyle options, and Rinerhorn is known for its off-piste freeriding. The Davos Klosters ski region is infamous for all of the off-piste freeriding opportunties. Many hardcore snowboarders feel that the Davos Klosters region would be ideal to spend an entire snow season.

The Madrisa ski area is located east of Davos and to the north of the quaint village of Klosters Platz. It's considered by many to be kind of a small off-the-beaten path and family friendly ski area. But, it shouldn't be quickly discounted with almost 1500m of vertical available and is certainly worth exploring a couple times as part of a week long trip to the greater Davos-Klosters ski region. Just don't head up on Saturdays when it is crazy crowded with families, kids and racers. From the Ratschenjoch summit, there are two ungroomed, marked ski routes leading to the #12 ski route through the Glatteggen area back towards the Madrissa mid-station with 700m of descent. Unfortunately, a good portion of the ski route descent is a groomed egress cat track. From the Ratschenjoch summit, there are several backcountry tours for splitboarders that head north out of the resort. And, also from the Ratschenjoch summit, you can combine the groomed intermediate and difficult pistes #8 and #9 leading through the scenic back valley village of Schlappin (for lunch at Berghaus Erika) and on down #10 back into Klosters for a massive 1500m descent. Just make sure to brush up on your Romansch language skills (or at least your Swiss German) before stopping for lunch.

After a long morning of snowboarding at Madrisa above Klosters, definitely grab lunch or apres ski at Bergrestaurant Saaseralp. At the Madrisa gondola base, there is also the popular Kanonen Bar. Back in Klosters Platz, stop at the Grastrochni umbrella bar on the final piste just before the Gotschnabahn cable car base area. Apres ski is a very tame affair and can be kind of hit-or-miss. Of course, it's best on the weekend evenings, but that's still not saying much. While Klosters can be a little quiet, your best bet for some nightlife is at either Casa Antica or Alpina Bar.

To reach the snowboarding in Davos from Zurich, the best bet is by train. It's a 2.5 hour ride with a single transfer in Landquart. This is the same train line that also services St Moritz, which is 30 minutes further along the line. If you are coming from the airport and don't want to use the trains, you can always use the Davos Express transfer bus service.? 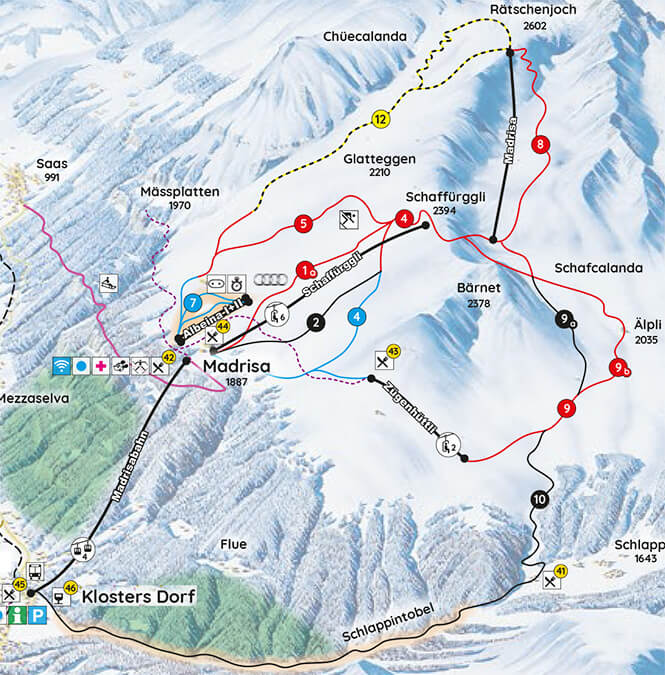