The 27th most popular snowboarding destination in Switzerland.

Southeast of Zurich and south of Davos Dorf, the Rinerhorn ski area has 13 pistes served by 4 lift systems accessing a vertical descent of 1050m. There is one gondola and 3 t-bar lifts. Rinerhorn is best known by snowboarders for mainly having beginner and intermediate pistes.

The Rinerhorn ski area is part of the Davos-Klosters ski region. Located in the eastern Swiss canton of Graubünden (aka Grisons), the Davos Klosters ski region consists of six ski areas in the Rhaetian Alps spread along the Landwasser valley. Lining both sides of the Landwasser valley the six ski areas include: Parsenn Gotschna, Jakobshorn, Madrisa, Rinerhorn, Schatzalp-Strela and Pischa. Overall, there are 110 pistes totaling 318km that are served by 55 lifts (27 drag lifts) with a maximum vertical descent of 2,030m. The Parsenn Gotschna ski area is the largest and most accessible from both Davos and Klosters, Jacobshorn is popular for its freestyle options, and Rinerhorn is known for its off-piste freeriding. The Davos Klosters ski region is infamous for all of the off-piste freeriding opportunties. Many hardcore snowboarders feel that the Davos Klosters region would be ideal to spend an entire snow season.

Located southwest of Davos, the Rinerhorn ski area is the furthest along the free ski bus route. It is west of Davos Platz and there are no base lodging options. The distance tends to keep more of the tourists away who don't really want to travel that far with the family. It tends to be quite popular with the locals seeking off-piste freeriding, especially on the off-the-backside uncontrolled backcountry lines. The extreme riders will want to try heading up to the Juonli summit and dropping off the back on the ungroomed, unmarked, uncontrolled line down east to the village of Sertig Dorfli, where there is a bus stop to get back to the base (guide recommended). For something a little more tame, at the end of the day there is a ski route #1 from the Juonli lift base station heading back down to the base of the main Rinerhornbahn gondola, but make sure there's plenty of snow to finish or you'll be walking. Overall, snowboarders at Rinerhorn will find plenty of t-bar lifts to keep you on your toes. You'll be treated to plenty of above-the-treeline alpine pistes along with some sweet gladed lines through the northfacing forests. The best snow is typically found off the Nullisch t-bar lifts. From the Nullischgrat summit, Piste #10 is truly amazing when there is fresh snow, but hardpacked and icy otherwise.

To reach the snowboarding in Davos from Zurich, the best bet is by train. It's a 2.5 hour ride with a single transfer in Landquart. This is the same train line that also services St Moritz, which is 30 minutes further along the line. If you are coming from the airport and don't want to use the trains, you can always use the Davos Express transfer bus service. Once in Davos, there is a ski bus or train to the Davos Glaris stop, which is adjacent to the Rinerhornbahn gondola base area.? 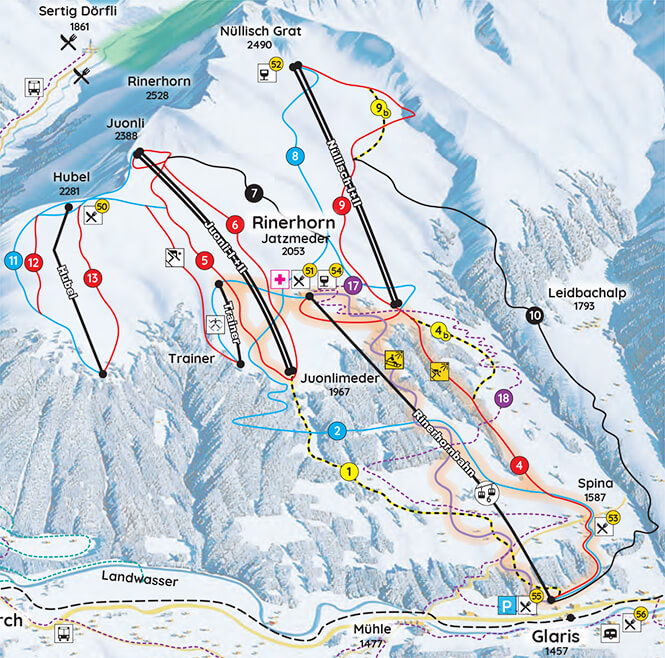