The 69th most popular snowboarding destination in Switzerland.

Southeast of Zurich and west of Davos Platz, the Schatzalp-Strela ski area has 1 piste served by 3 lifts accessing a vertical descent of 785m. But, most of the time you'll be doing quick laps to the Schatzalp mid-station from the StrelaPass summit for 485m of descent. Keep in mind that the single main piste does not run down to the Davos Platz funicular base - it runs down to Davos Dorf!

The Schatzalp-Strela ski area is part of the Davos-Klosters ski region. Located in the eastern Swiss canton of Graubünden (aka Grisons), the Davos Klosters ski region consists of six ski areas in the Rhaetian Alps spread along the Landwasser valley. Lining both sides of the Landwasser valley the six ski areas include: Parsenn Gotschna, Jakobshorn, Madrisa, Rinerhorn, Schatzalp-Strela and Pischa. Overall, there are 110 pistes totaling 318km that are served by 55 lifts (27 drag lifts) with a maximum vertical descent of 2,030m. The Parsenn Gotschna ski area is the largest and most accessible from both Davos and Klosters, Jacobshorn is popular for its freestyle options, and Rinerhorn is known for its off-piste freeriding. Even though Schatzalp is considered part of the Davos-Klosters ski region, oddly it is NOT part of the ski pass system so you'll need to purchase a separate lift pass.

Located just above Davos Platz, the Schatzalp-Strela ski area is a much smaller, gentle ski area for the valley. While considered a family-friendly place, it also happens to be the start of one of the major backcountry snowboarding adventures, the Mederger Flue. The Mederger Flue starts from the summit of Strelapass (2350m) and follows the route north towards Chörbshorn where you'll encounter some of the most beautiful alpine terrain (guide recommended). The main reason for most snowboarders coming to Schatzalp-Strela ski area is either for a backcountry adventure starting point or to come up for a scenic lunch. If you are just spending the morning doing laps, don't miss grabbing lunch up at Bergrestaurant Strela Alp - it's worth it!

If you do stay in Davos and are looking for some apres ski action, then check out the Postli Club, the Cabanna Club, the Ex-bar or the Piano Bar. Apres ski is a very tame affair and can be kind of hit-or-miss. Of course, it's best on the weekend evenings, but that's still not saying much.

To reach the snowboarding in Davos from Zurich, the best bet is by train. It's a 2.5 hour ride with a single transfer in Landquart. This is the same train line that also services St Moritz, which is 30 minutes further along the line. If you are coming from the airport and don't want to use the trains, you can always use the Davos Express transfer bus service. The Schatzalp-Strela ski area base lift is located in Davos Platz.? 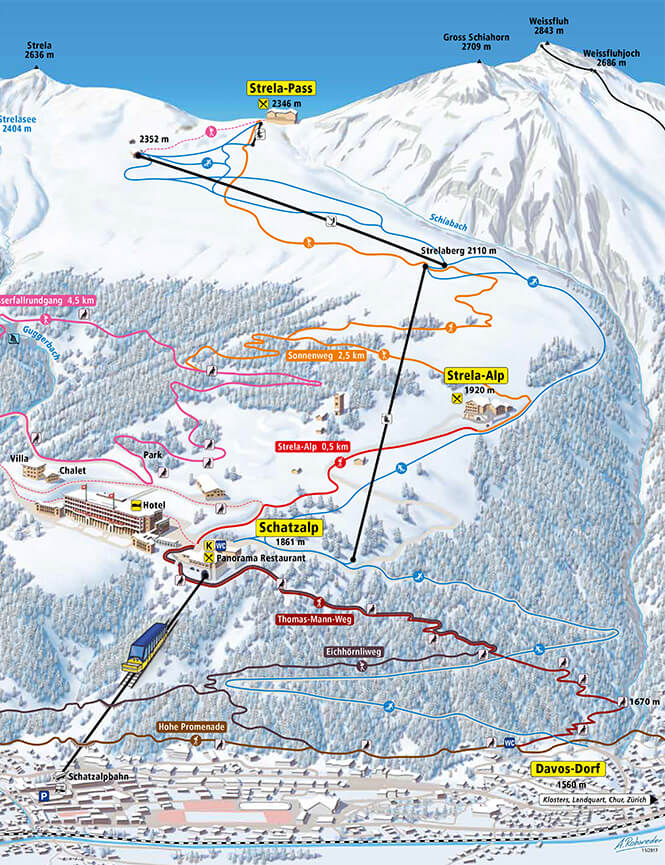