The 80th most popular snowboarding destination in Switzerland.

South of Zurich and east of Andermatt, the Disentis ski area has 60km of pistes served by 9 lifts accessing a maximum descent of 1500m. The village is an old Romansch-speaking community, which they call Mustér. Disentis is now interconnected with Sedrun via cable cars. Once in Sedrun, it is now possbile to snowboard all the way to Andermatt via interconnected lifts (requires walking across Sedrun to get to other base area).

This family-friendly ski area is popular with beginner and intermediate snowboarders. One of the well-known descents is the 12km route from Pez Ault down to S. Catrina descending 1600m. But don't let the family-friendly reputation fool you -- there is also excellent off-piste routes. The most popular freeride lines are the descents in Val d'Acletta and Val Segnas. In addition, there is an marked ski route #134 from Cuolm da Vi leading down into Sedrun.

The new Andermatt-Sedrun-Disentis SkiArena now lift-interconnects three distinct ski areas including Andermatt Natschen, Sedrun-Oberalp and Bergbahnen Disentis. Formerly known as the Gotthard Oberalp Skiarena, the old ski region relied on the Matterhorn Gotthard Bahn railway to interconnect between ski areas. The recent lift and piste additions now allow a seemless lift interconnect from the northern outskirts of Andermatt to Oberalp Pass to Sedrun and over to Disentis. Overall, there are 180km of pistes served by 33 lifts. The levels of difficulty of the pistes range from 28% beginner to 50% intermediate to 22% advanced. For freeriders, there is also 16.5km of ungroomed, non-avalanche controlled ski routes with plenty of powder to explore. Keep in mind that there is not a lift connect to the other Andermatt ski area, Gemsstock. The interconnected Andermatt Natschen ski area is located on the northern outskirts of Andermatt and it is a long walk into town, let alone cross-town to Gemsstock. Similarly, while technically interconnected at Sedrun, there is a small walk across Sedrun between base areas to access pistes to Oberalp Pass or to Disentis.

After a long day of snowboarding in Disentis, don't expect much for apres ski action. The best bet is right at the base at Tipi Nevada.

To reach Disentis by air, fly into Zurich International Airport (ZRH). From the airport, take the train through downtown Zurich and then onto Chur. Transfer to the Rhaetian Railway towards the western terminus in Disentis. Disentis is also the eastern terminus of the Matterhorn Gotthard Bahn railway. The MGB railway connects to Sedrun, Oberalp Pass and over to Andermatt.

PRO TIP: The lift base is actually located well above town in Santa Catrina. It's at least a 10 minute walk, so choose your lodging location carefully. 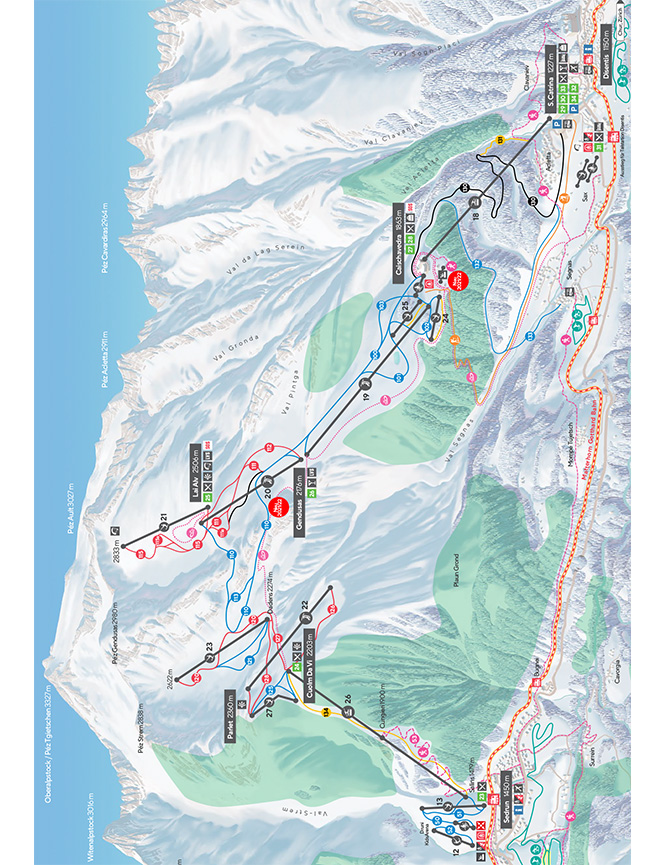