The 51st most popular snowboarding destination in Italy.

North of Torino and Pont St Martin, the Chamois ski area has 5 pistes totaling 18km that are served by 4 lifts accessing a maximum descent of 650m. It is well known for its beginner to intermediate groomed pistes, along with good off-piste backcountry terrain for advanced snowboarders. The level of piste difficulty is split from 15% beginner to 85% intermediate.

The quiet town of Chamois is the only car-free village in Italy and is located up on a plateau. The main access to Chamois is via a cable car from the village of Buisson located on the valley floor. The lifts in the ski area tend to be older and quite slow. The best Chamois snowboarding is during the months of January and February.

To reach the snowboarding in Chamois by air, the two nearest airports are Turin Caselle (TRN) and Milan Malpensa (MXP). The Turin airport is served by European airlines, and the Milan Malpensa airport is served by both European and major international airlines. While a rental car is fast and convenient with a sense of independence for getting to the ski resort, it can be a huge source of stress with complex road network navigation, locating the expensive resort overnight parking, and challenges with narrow roads during poor winter weather. But, unlike the easy public train and bus options for Swiss and Austria ski resorts, the public transport options out of Milan and Turin are very complex with difficult connections from multiple non-integrated transportation companies. While driving can be a couple hours, the public transportation options stretch into 4-7 hours of additional travel.

From Milan Malpensa airport, the only train option is the Malpensa Express leading into downtown Milano Centrale (45 minute ride every 30 minutes). From Milano Centrale, take the train to Chivasso (may require a connection) where you will change trains leading up into Valle d'Aosta. The main train stops in Valle d'Aosta for public buses up to ski resorts provided by Arriva Savada (savda.it) include Chatillon which leads up to Torgnon, Chamois and Breuil-Cervinia). So, in all, it could take five trains plus a final bus. Alternately, if your time works right, there is bus service that skips the trains directly to the final train station in Chatillon from Arriva Savada (savda.it), which runs three times a day during winter months. From Chatillon/Saint-Vincent train station, use the coach bus service up the valley north into Buisson. Buisson is located about 12km north of Chatillon in the Aosta valley and 16km south of Breuil-Cervinia.

From Turin Caselle airport, there is a metro train from the airport leading into downtown Turin (Madonna di Campagna). Unfortunately, the train station needed for Valle d'Aosta destinations requires a taxi or ride from Madonna di Campagna to the Torino Porta Susa or Porta Nuova train stations. Alternately, it is possible to take a bus from the airport direct to the train station. Then, there is a train to Ivrea where you'll connect for the train into Valle d'Aosta. The main train stops in Valle d'Aosta for buses up to ski resorts include Chatillon for Torgnon, Chamois and Breuil-Cervinia. So, in all, it could take a minimum of a bus, then two trains and a final bus. As a final option, there is a direct bus from the airport to Aosta train station Arriva Savada (savda.it), which runs three times a day during winter months. From Aosta, you can take a regular train back down the valley to the aforementioned train station to catch a bus up to the ski resorts. From Chatillon/Saint-Vincent train station, use the coach bus service up the valley north into Buisson. Buisson is located about 12km north of Chatillon in the Aosta valley and 16km south of Breuil-Cervinia.

BONUS TIP: During Chamois snowboarding, use care on Piste #1. Some of the lines off the left side do not lead back to the ski lifts and exit to homes and the access road.

Overall, Chamois is the 51st most popular snowboard & freeride destination of all 57 snowboarding resorts in Italy. 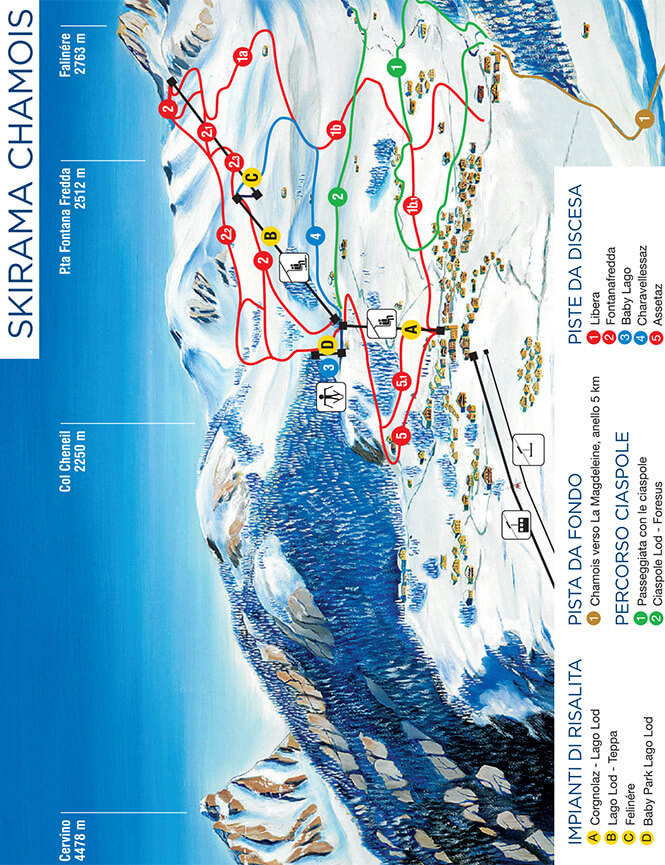