The 42nd most popular snowboarding destination in Italy.

North of Turin and south of Aosta, the Pila Snowland has 27 pistes totaling 55km that are served by 10 lifts with a maximum descent of 800m. At this car-free, family-friendly resort, the predominantly north-facing, forested slopes are known to hold snow well. The level of difficulty ranges from 70% beginner/intermediate to 15% advanced to 15% expert. The best snowboarding at Pila is during the months of January and February.

The village of Pila (Greesan) is located south of the city of Aosta. It is conveniently accesssed from the train station in Aosta by a gondola lift that takes about 20 minutes to climb 1200m. There are two intermediate stops on the gondola at Plan Praz and at Les Fleurs. From the top station in the village of Pila, there are ski lifts heading up to the pistes.

While Pila is popular with intermediate snowboarders, there are some challenging lines to explore. For a long ride, you'll want to head to the Couis lift top station and follow the 1200m descent to the gondola mid-station at Plan Praz. Pila is also known for good freeriding options, such as off the Grimondet lift. Alternately, you can check out the freeride piste "Platta de Grevon" starting at 2700m. On foul weather days, there are glades to explore off the Chamole lift.

For the freestyle snowboarders in your crew, Pila Snowland has a single terrain park. The Aeraeffe Snow Park has lines for all levels and is over 600m long. It is located off the Grimod lift.

Pila is a relatively unknown resort that is usually quiet on the weekdays. But, on the weekends, it get more rowdy and has a lively apres ski scene. If you are looking for more affordable lodging options than in Pila, make sure to look at the villages off the two gondola mid-stations at Plan Praz or Les Fleurs.

To reach the snowboarding in Pila Snowland by air, the two nearest airports are Turin Caselle (TRN) and Milan Malpensa (MXP). The Turin airport is served by European airlines, and the Milan Malpensa airport is served by both European and major international airlines. While a rental car is fast and convenient with a sense of independence for getting to the ski resort, it can be a huge source of stress with complex road network navigation, locating the expensive resort overnight parking, and challenges with narrow roads during poor winter weather. But, unlike the easy public train and bus options for Swiss and Austria ski resorts, the public transport options out of Milan and Turin are very complex with difficult connections from multiple non-integrated transportation companies. While driving can be a couple hours, the public transportation options stretch into 4-7 hours of additional travel.

From Milan Malpensa airport, the only train option is the Malpensa Express leading into downtown Milano Centrale (45 minute ride every 30 minutes). From Milano Centrale, take the train to Chivasso (may require a connection) where you will change trains leading up into Valle d'Aosta to the city of Aosta. So, in all, it could take five trains plus a final gondola/bus. Alternately, if your time works right, there is bus service that skips the trains directly to the final train station mentioned from Arriva Savada (savda.it), which runs three times a day during winter months. From the Aosta train station, you can either take the gondola or a ski bus up to Pila.

From Turin Caselle airport, there is a metro train from the airport leading into downtown Turin (Madonna di Campagna). Unfortunately, the train station needed for Valle d'Aosta destinations requires a taxi or ride from Madonna di Campagna to the Torino Porta Susa or Porta Nuova train stations. Alternately, it is possible to take a bus from the airport direct to the train station. Then, there is a train to Ivrea where you'll connect for the train into Valle d'Aosta. The main train stops in Valle d'Aosta for buses up to ski resorts include Pont St Martin (Alagna and Gressoney), Verres (Brusson and Champoluc), Chatillon (Torgnon, Chamois and Breuil-Cervinia), and Aosta (Pila, Courmayeur and La Thuile). So, in all, it could take a minimum of a bus and a final gondola/bus. As a final option, there is a direct bus from the airport to Aosta train station Arriva Savada (savda.it), which runs three times a day during winter months. From the Aosta train station, you can either take the gondola or a ski bus up to Pila.

PRO TIP: Keep in mind that the gondola back from Pila back to Aosta closes at 5pm. So, watch you time at apres ski or you'll be taking a taxi back down.

Overall, Pila Snowland is the 42nd most popular snowboard & freeride destination of all 57 snowboarding resorts in Italy. 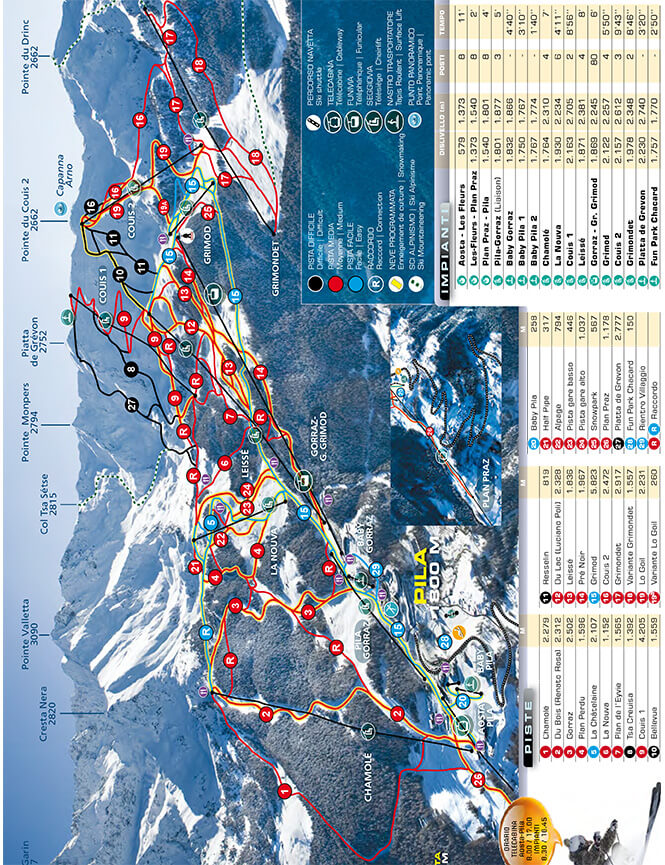