The 70th most popular snowboarding destination in Austria.

In the Ötztal above Oetz, the Hochoetz ski area has 13 pistes totaling 41km that are served by 13 lifts with a maximum descent of 700m. At this family-friendly ski area, the level of difficulty ranges from 34% beginner to 57% intermediate to 8% difficult. The best Hochoetz snowboarding can be found during the months of January and February.

If you're looking for some challenge, check out the steep Mohrenkopf piste (#8) or Wetterkreuzbahn (#12). Also, off the Wetterkreuzbahn summit, there are three ungroomed ski routes totaling 3.5km to explore.

For the freestyle snowboarders in your crew, the Hochoetz ski area has a terrain park to session. The WIDI Terrain Park is located off Piste #2 and has its own drag lift for access.

After a long morning of shredding, check out the excellent on-mountain dining options. Try heading to the very scenic Bielefelder Hütte, Balbach Alm or Kühtaile Alm.

To reach the ski area by train, use the Otztal train station. Then, use the public bus to Oetz. From Oetz, there are two options. First, the Acherkogelbahn gondola can be used for uplift/downlift to the summit station. Second, if you are staying at the Oschengarten (1538m) base area, there is a free ski bus that links Oetz with Ochsengarten.

PRO TIP: From Ochsengarten, there is a short bus to the nearby Kuehtai ski area, which hosts some off-piste terrain and an excellent terrain park. 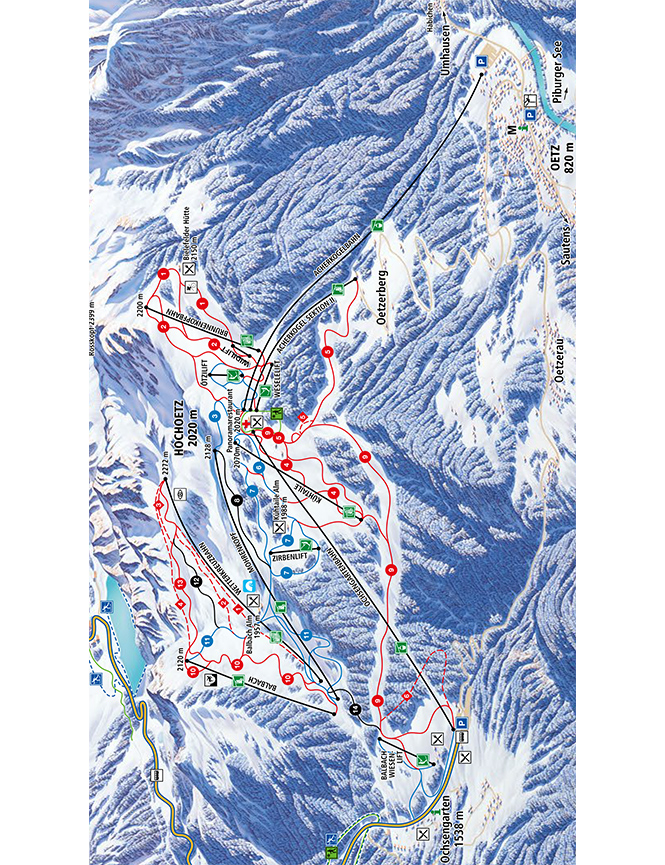